At NCAR we are all still on an post auction high, thanks in a large part to the Clarice Cliff pieces we were lucky enough to be auctioning. 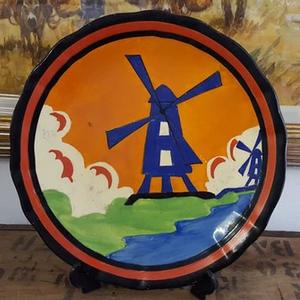 At NCAR we are all still on an post auction high, thanks in a large part to the Clarice Cliff pieces we were lucky enough to be auctioning.

The bizarre windmill appliqué plaque fetched an incredible £3800 and the vase £800 and have now been packed and shipped to their new homes.

It's only right then that we take some time to appreciate just how important Clarice Cliff is in the history of British pottery and how amazing her achievements are.

That she was born in 1899, in the final years of Queen Victoria's reign. How amazing to think that someone, especially a woman, born in 19th Century Victorian England could bring such a modern outlook to the pottery world within a short space of time and whose focus was pieces for women painted by women.

Her pottery patterns and design epitomise the modern excitement of the Art Deco, 1920s Jazz age and this vibrant style is what shines through in her pieces.   The strong colours, the shapes of the pieces, the hand painted brush strokes and bold patterns are what made her style so popular then and what keeps them so sought after today, some 90 years later.

What is so astounding though is the sheer volume of pieces that were produced by Clarice and the "Bizarre" girls ( and 4 men!) who made up her team.

Let's just take a moment to think about that. 8 million.

We were amazingly lucky here at NCAR that the Bizarre Windmill plaque, our star lot of the September auction, was from the Appliqué range which was only produced between 1930-1931, making it more sought after and hence the higher price.  A pattern such as Autumn Crocus, was produced in much larger volumes and can be picked up for considerably less. A good starting point for anyone thinking about beginning a Clarice Cliff collection.

So maybe now is the perfect time to start rummaging in the attic or taking a closer look in the garage and who knows maybe you'll find our next star lot!